I was born on the 18th November 1942 at ISSOUDUN, a small town in the center of France, in an area named "Berry".

My parents were very fond of music and they both played the violin as a hobby. When I was seven years old I asked them if I could go to music school. After spending two years learning musical theory, and not playing an instrument, I decided to leave and continued my education at college. At the same time I began to teach myself music according to my inspiration. At first I played on a small mouth organ, then I learnt the banjo, guitar, piano and saxophone. All instruments fascinated me and made me feel very happy. During these years, I went to Technical School to learn Electrical and Mechanical Engineering.

When it was time for me to do my National Service : I accomplished it as ...a conductor for a Military dance orchestra ! At the same time I discovered the many possibilites of the recorder. When I left the military, I started to to play the "Kena" a flute from South America.

I first heard the wonderful sounds of the Pan-pipes from Romania in 1972, I immediately felt that it was the right instrument for me to express my own feelings and music. 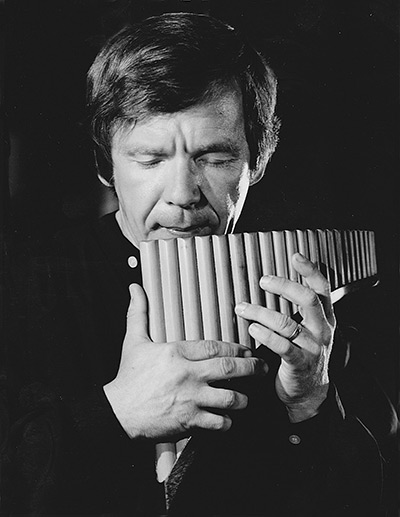 So I set off to Romania to look for Pan-pipes but without success.

After many difficulties and a long, long time, I succeeded in having some very beautiful Pan-pipes made for me by a French Instrument maker !

In the year 1976 I met my first accompanist : the organist Georges BERNES. It was in the church of Marciac, a village in South-West of France where I was on holiday. I explained to him my musical project : to play freely and spontaneously, making room for emotion, impulse, and without the rudiments of theory, but with a deep spiritual concentration.

In 1977 we gave our first concerts in France and recorded our first record : "Le Mystère de Noël" (the Mystery of Christmas).
We then gave more and more concerts in France, Germany, Belgium, Japan, Israël, Switzerland and also made more records, I have also met other musicians who accompany me : Jean DAHAIS (organist), Elisabeth VALLETTI (harpist), Ulrich MARXCORS (percussionist), Magali ZSIGMOND (harpist), Jacques BURTIN who plays the "kora" an instrument that comes from Africa (Senegal) which is similar to a harp, Katrine HORN (harpist), and Michel DEVAUX-LUEZ (guitarist).

All these musicians are really fantastic and are in possession of the rare talent to be able to express themselves spontaneously with their instruments, with a very deep feeling, they help me to go on my way to new horizons....